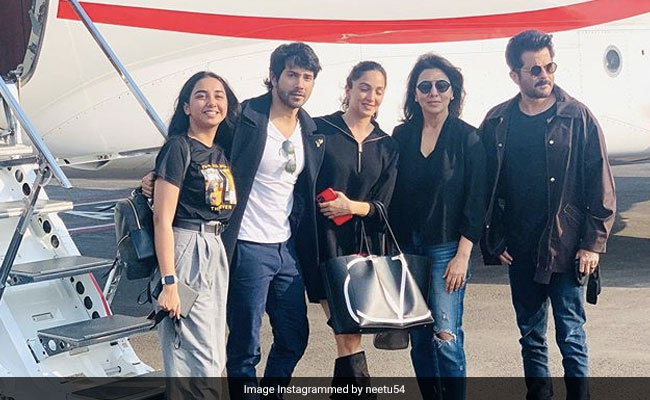 Neetu Kapoor is all set to renew work along with her forthcoming movie Jug Jugg Jeeyo, co-starring Anil Kapoor, Kiara Advani, Varun Dhawan and content material creator (and now actor) Prajakta Koli. Neetu Kapoor, sharing an image along with her co-stars from the movie, wrote that she is “nervous” in regards to the journey. The veteran actress added, “My first flight, in these scary occasions. Nervous for this journey.” Referring to her late husband and actor Rishi Kapoor, Neetu Kapoor added, “Whereas Kapoor Sahab, you are not right here holding my hand, I do know you’re with me… #RnR thanks for encouraging me to do that.”

Neetu Kapoor signed off the put up saying, “We’re all Covid examined and protected, therefore eliminated masks whereas taking image.” She added the hashtag #JugJugJiyo. Sharing the identical image on his Instagram profile, Anil Kapoor wrote in his put up: “And we’re off. #JugJuggJeeyoBegins.” Check out the image right here:

Taking off to new beginnings with these brilliant smiles!#JugJuggJeeyo@AnilKapoor#NeetuKapoor@Varun_dvn@advani_kiara@raj_a_mehtapic.twitter.com/9GpRpKlMwt

Neetu Kapoor was married to actor Rishi Kapoor, who died in Mumbai on April 30 after battling most cancers for 2 years. He was 67. Riddhima Kapoor Sahni, who’s a Delhi-based jewelry designer, has been staying along with her mom in Mumbai since then.